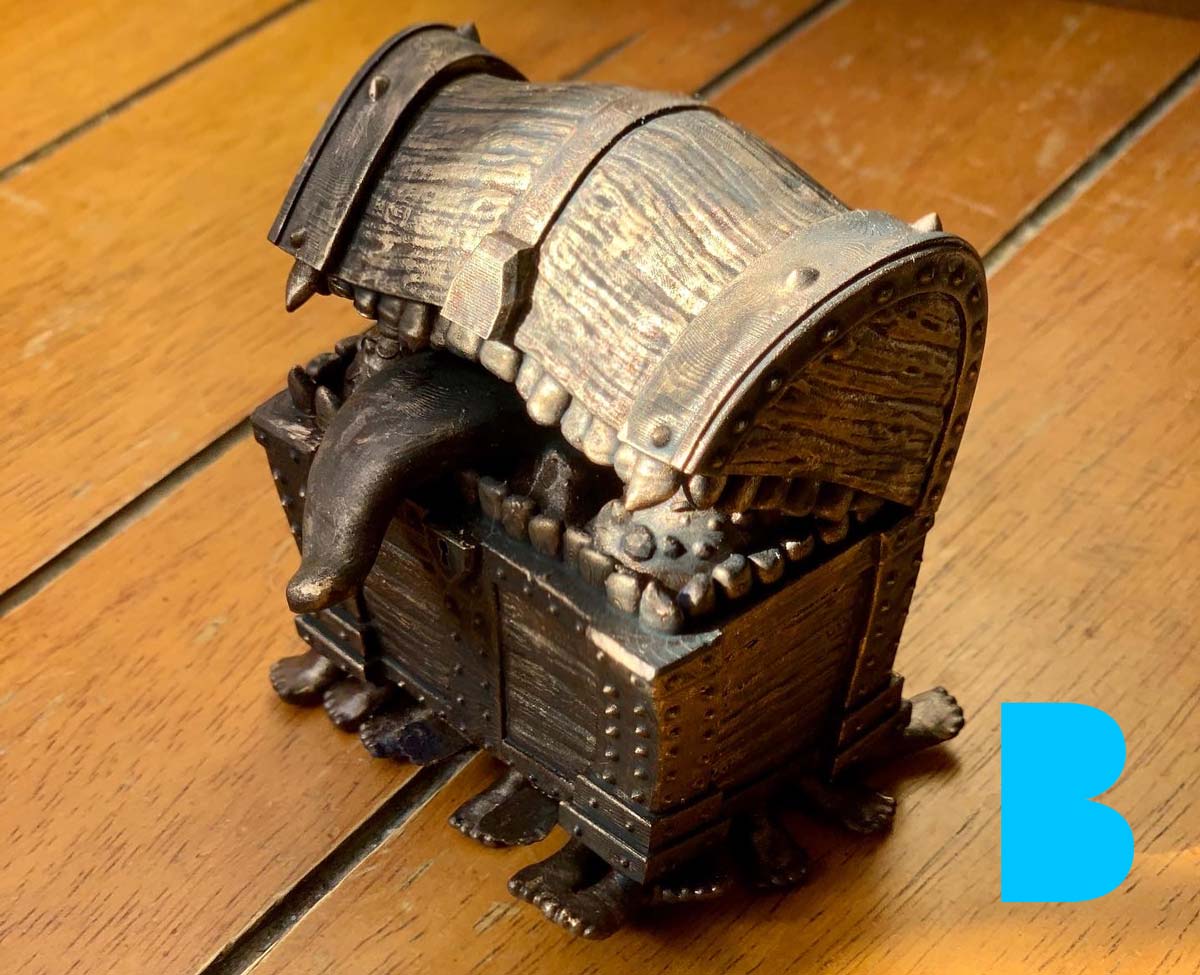 The Luggage from Discworld is a beloved character. Much like most Discworld characters to be honest, and there is a huge amount of them to draw from.

Creating the Luggage in Blender 3D

The first step of this project was to actually create the model. I wanted to get better at predicting printable pieces, and though this would be a great character to start with because of the relatively basic design. Essentially just a box with a rounded lid, I thought my fledgling 3D printing skills might be able to handle this one.

As you can see from the image above, I modelled a lot fo the geometry out of basic shapes, then added some deformations to give it a more stylised look, and then sculpted in details such as wood grain, dents and scratches. It is by no means “perfect”, and the description does say “hundred of legs/feet” But that just means there is room for improvement in version 2.0 😅

Preparing to Print in Blender.

One of the issues I’ve found with resin 3D printing from Blender, is that though it is easy enough to print a solid piece, it becomes much harder if you want to print a hollow piece. So far I have been slicing the files with Chitubox, Lychee, and the Anycubic workshop, but none would be able to figure out how to hollow an object that is made up of many pieces. I get it, I just wish they had a magic ‘join’ button or something.

The easiest way I have found to be able to hollow the print is by combining the meshes with a boolean, or by re-meshing the whole piece into one joined, watertight geometry. Once it is one single piece, most of the slicers have no problem hollowing it out so you can save on resin 👌.

After the model is ready, I simply export the STL from blender and take it into the slicing software.

Now, I should say, that I am still pretty new to the whole STL thing, and this is really my second design and print, the first one I haven’t really publicised yet because I am still working on the perfect print (and it’s very hard to hollow). So this print is a “failure”, or at least there were some failings. The feet on the front and back didn’t print properly, and there was a slight issue with the teeth on the left side (as you look at it). But this could be solved with a bit more time spend on the supports… Damn my impatience.

Soooo, a few people have asked my if I will make the STL available, and right now, I really don’t know. There are hurdles like copyright, and making sure the print would work 100%. I’m still trying to figure out how people are giving away Marvel characters on their Patreon. Anyway, we will see. It would be nice to generate more money from 3D or STLs to allow me to devote more time to it.

I’m lazy, so I literally just pulled off the supports, and put the model in my wash and cure machine (who has time to sand?). If the print had come out perfect, maybe I would have spent more time on prep, but I just wanted to see what it would look like painted.

The paints I use are Games Workshop paints, I just used a base coat for a dark bronze look, a topcoat dry brushed to pick out some highlights, and then a dark wash that fills the cracks and crevices to give it a fake ambient occlusion or ageing effect. This is a technique I use quite often because it gives a nice finish for very little time spent on it – probably about half an hour max.