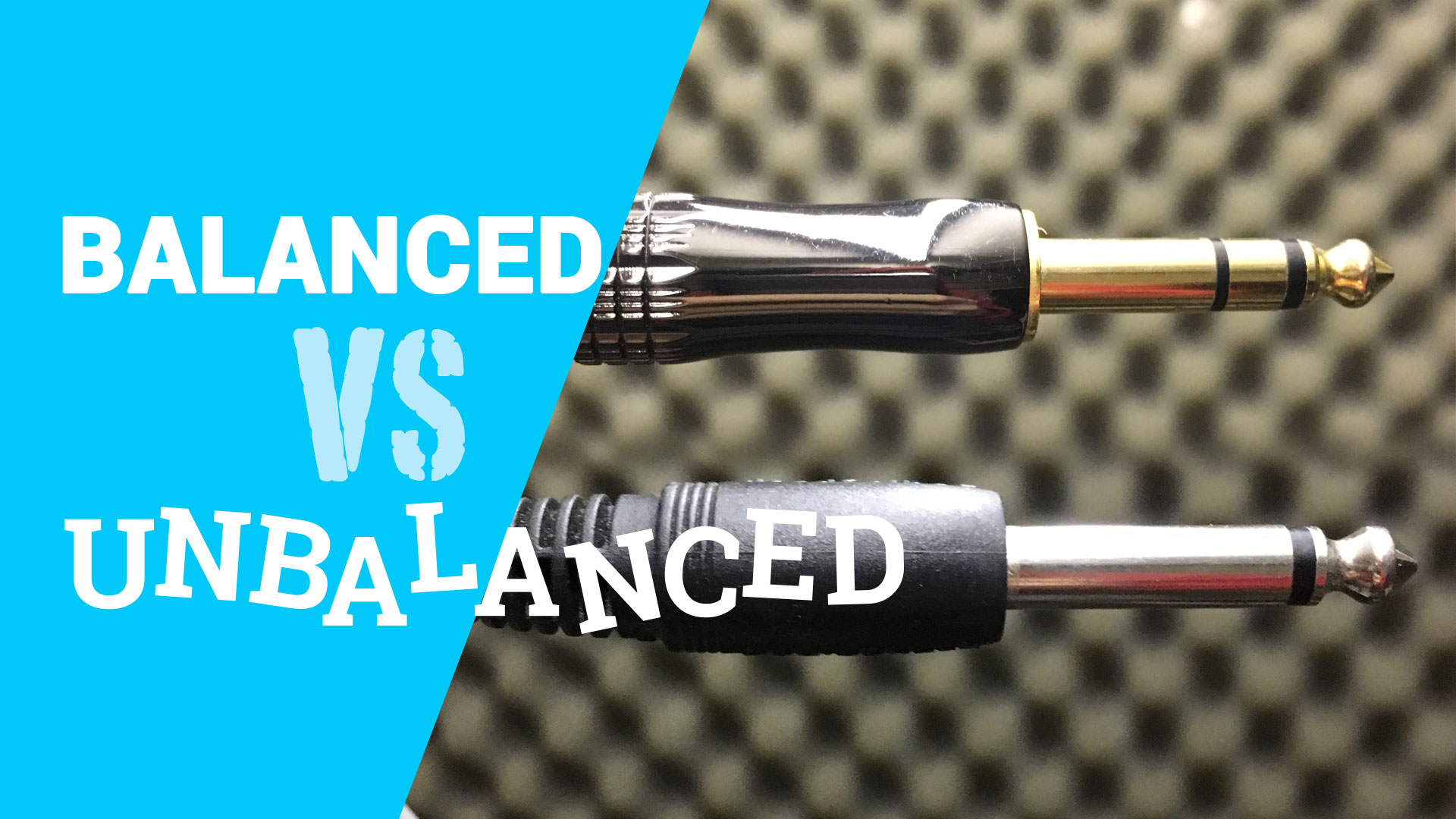 Do you often ask yourself what the difference between a balanced VS unbalanced cable is? Well so did I for a long time, in fact I went through a phase (no pun intended) of replacing a lot of my leads with balanced XLR cables, only to realise I had been replacing perfectly good balanced cables that had a TRS Jack connector as opposed to an XLR connector. So I was young and foolish, and always associated XLR with balanced signals – which isn’t always the case. So I am going to show you how to spot balanced VS unbalanced cables, what balanced even means, and how the magical-voodoo, that is is balanced audio actually works.

So, what’s a balanced cable? and why is it good?

The main benefit of balanced cables, compared to unbalanced guitar or patch cables, is their ability to transfer sound signals over much longer runs/distances without signal loss, or interference. Balanced cables have a very low signal to noise ratio, so will often give you a much better sound, especially over longer cables. The problem with cables in general, is the same thing that makes them useful – they are very good electric conductors and are very sensitive to electromagnetic forces.  They are long runs of copper, and the copper acts much like an antenna. Though the cables likely have an internal screen or earth in order to try an mitigate the issue, over long lengths of cable the problem is compounded. This is why you probably need a balanced cable.

How to tell balanced vs unbalanced cables apart.

I will start with unbalanced cable, simply because if you don’t know the difference between the cables, you will probably own a majority of unbalance cables. They tend to be cheaper, which has a part to play and can usually get you by until you start taking audio a little more seriously.

probably the most common type of unbalanced audio cable is the good ol’ fashion guitar cables, but you will also find that most keyboards use unbabalced connectors (basically guitar cables) and unbalanced is also used for patch cables.

Let’s look at the images below to see what we should look out for. An unbalanced is the simplest form of cable, it send one, mono, audio signal down length of copper wire. The end of the cable will often be a 1/4inch jack which looks like this:

you will notice that there is a black (though the colour can vary) line that divides the jack plug into two parts; the metal tip and the metal sleeve – this connector is called a TS connector, which simply means TIP and SLEEVE. ONE black line indicates that there are only TWO internal cables. One carries the audio signal, and one is the earth.

If there are TWO black plastic lines on the jack plug/connector, then it is likely you are looking at a balanced cable. The two plastic lines divide the tip into three sections. The tip, the ring and the sleeve – thus is is called a TRS connector which simply means TIP, RING, SLEEVE. The three parts of the connector means there are three internal cables and here in lies the mystical magical voodoo that makes this balanced audio thing work. And I find it pretty fascinating – yes, I’m a geek. Duh. You will likely see more balanced cables with XLR connectors, because they are generally more common for balanced audio and are easier to tell apart from other connectors. They look like this: So how does this balanced cable work?

Well, with the three sections of the TRS or XLR connector, it allows us to have three internal cables, this is the magic number for balanced audio. One of those internal cables is the “earth” – same as with the unbalanced cable, but now we have two cables that carry the sound signal. This is similar to how a stereo cable would work, two internal wires that carry the left and right signal, except in balanced audio, both wires carry the SAME signal – but with a sprinkling of magic that helps made it a ‘balanced’ cable – the magic is phase. What’s phase? Ok, yeah I guess we need to know a little about phase, and that means we need to know about audio waves.

You might be about to glaze over and think this is getting very scientific, but if you have used any DAW, such as logic pro, pro tools, cubase etc., then you will see audio waves regularly shown as waveforms in your arrange window. These waveforms are a representation of the audio that has been recorded in your DAW. Let’s look at a basic sound wave.

Phase and audio thats out of phase.

You may be aware of phase, as microphones being out of phases can be the bane of any recording artist, mixer, engineer etc. But what is phase? Well if you mic up one sound source i.e., a snare drum, and you are using two overhead microphones, then there is a chance the sound could be recorded out of phase. This happens because the sound from the snare reaches the microphone at slightly different times. That could look like this:

As you can see, essentially the same sound is being recorded by each microphone, but they are just slightly out of sync, or phase. At small amount of this isn’t a massive problem, but becomes more and more noticeable the further out of phase the sound becomes. Until finally at 180 degrees out of phase, the signals are hitting the microphones at a perfectly offset time and the sound is being cancelled out completely.

Hopefully this explains phase to some degree. If this makes sense to you then you then we are almost there! Take a sip of tea, put your feet up, we are on the home stretch. 😀

The magic of Balanced Audio

So now you have an understanding of phase; that’s good, because phase is the magic ingredient that makes balanced audio work, and it’s so beautifully, elegantly, simple.

If you remember, we discussed that balanced cables are good for long runs or cabling, either in the live or studio environment. Balanced cables prevent the unwanted interference that can be picked up by unbalanced cables. But how does it work?

From one end of an XLR lead or TRS lead the signal is sent out of phase.

Still haven’t figured it out yet?

Vintage. Edited by my nephew , God of Hamsters, ru