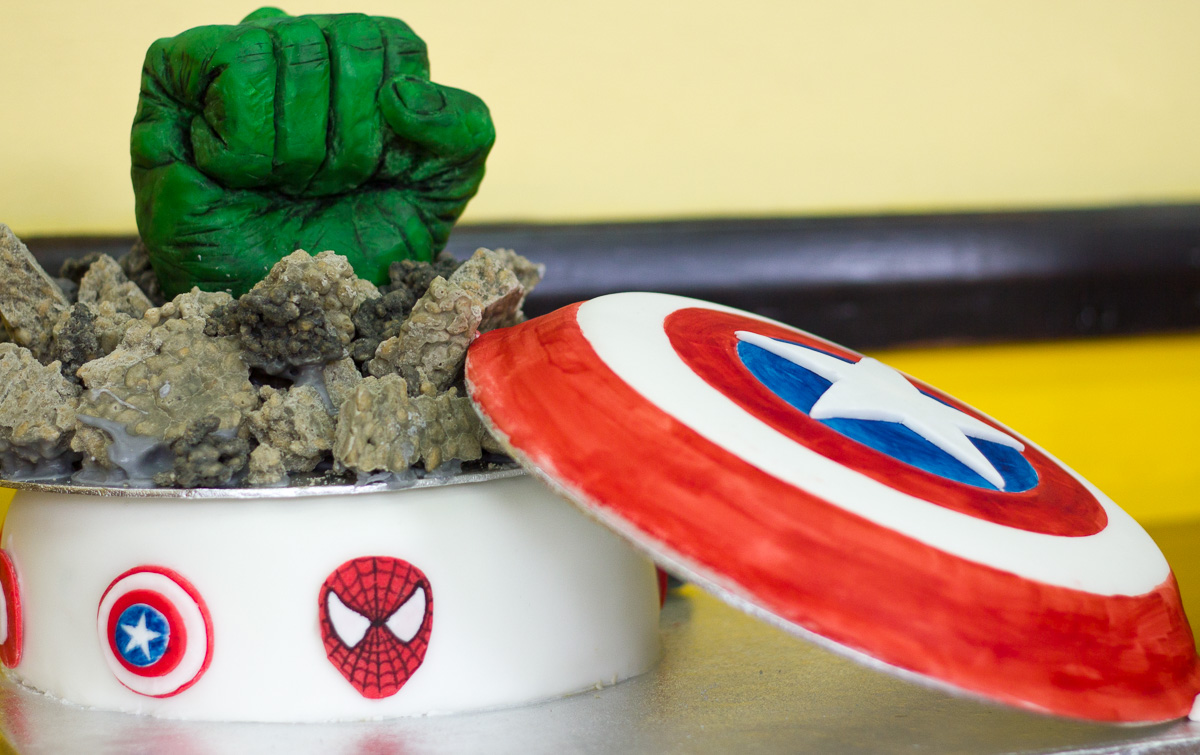 It was recently my lovely (though sometimes monstrous) Nephews Birthday. As I have been tasked with making his birthday cake in previous years, it again fell to me to design and create a SUPER AWESOME AMAZING (his words) birthday cake to smash all birthday cakes that have come before. This would be no easy task as last year I had made a free-standing Olaf cake. That’s the snowman from Disney’s Frozen for anyone lucky enough to not know who I’m talking about… who am I kidding, I loved Frozen 😀

We finally decided on a Hulk Fist cake with edible rubble, Captain America shield and super hero emblems. Sorted. Now I just had to make it all.

I am in no way taking the credit for coming up with this idea, as with most ideas, the inspiration came from elsewhere. My sister had sent me some image of cakes she had seen on Pinterest, Marvel has been riding a huge wave of success recently with Ironman, Spiderman, Avengers and Guardians of the Galaxy doing phenomenally well at the box office and as a result you have almost every child asking for something superhero related for their birthday.

We found a Marvel and actually DC (can’t leave Batman out, right?) inspired cake design that had a hulk fist popping out of the top tier and instantly thought it was a great idea. I didn’t want to copy the design as there is no fun in that, so I sat down and started to design what I thought would be an awesome cake.

The thing I liked about the cakes on pinterest was that the hulk fist was popping out of the top of the cakes as if the incredible Hulk himself had punched his way through. Except, none amazed me. They are kids cakes sure, but I felt like they were missing an opportunity to make it truly Hulk-like. Many of them featured icing neatly peeled back as if a balloon had been popped or something similar, I didn’t feel it had the weight or epic-ness of what the hulk would actually do. I decided that he had to be bursting through concrete or tarmac; it had to be a cake to make old hulk himself proud! (though Bruce Banner might not think as highly of it)

Initially I planned on making Hulks fist out of rice krispie treats mixture to save on weight, as I had the previous year with Olafs Head. The benefit with this is that you can make quite large structures, that don’t weigh a great deal and are also edible. Because of the marshmallow, when the mixture is warm you can model it and sculpt it into various shapes. It’s a pretty good way of creating large shapes in interesting designs. Then once it cools and sets it can be cut or more-accurately ‘sawn’ with a sharp, serrated knife into even more detailed shapes. However I found that it would never really set hard enough to support it’s own weight on a small section of itself – such as Olafs neck or a hulk wrist. With last years Olaf cake, I had made only the head with rice-cripsy treats and then supported it on top of the cake body with a wooden dowel. Unfortunately this only lasted a few hours, before it started to collapse under it’s own weight.

I decided that the Hulk fist cake design probably needed to last a bit longer than a few hours while I sculpted the fist. Once we decided on the size of the cake, I thought it would be best to scale-down the size of the fist to still have enough space on the cake for the rubble. I began looking at other ways to make a Hulk fist and my sister and dad mentioned modelling chocolate that they had seen used on the choccywoccydoodah TV show. So I googled how to make modelling chocolate and watched a few videos and read a few articles before I decided it was worth giving it a go, I do like to try out new ways to create things after all.

Modelling chocolate is basically made of two parts, chocolate and corn syrup. It is  the combination of the two that makes the chocolate into a clay or plasticine-like consistency that is far more rubbery and elastic and easy to model that chocolate alone would be. The chocolate can ether be actual chocolate or candy melts. As the first few videos I watched and articles I read suggested that candy melts can be a better choice when more complex details are needed, I decided to go with them.

I watched a video and thought I knew how best to make the modelling chocolate. The step by step guide was a little lacking and the first batch went a little wrong, but in the end was totally usable. The most common mistakes are over-heating the chocolate, or over or under mixing the corn syrup and melted chocolate. My first batch was over mixed, and the oil started separating. When you pour in the corn syrup you only have a short time to mix it into the melted chocolate or candy melts before it started to change consistence. If you don’t mix quick enough there will still be mixture that isn’t quite combined, so I tend to mix quick but stop once the mixture texture changes. The mixture should stick together and be able to form a soft dough-like ball. Then tip the mixture out onto a piece of cling film. Fold the film over the top of the mixture and then spread the chocolate  between the cling-film so get a layer about 5-10mm thick to cool it down quicker and evenly.

How you decide to make the fist is up to you. You can either roll out the chocolate flat and then cut fingers out, before ‘rolling’ the fingers up into a fist. This is fairly straight forward, but I decided to start out with a lump and cut away a lot of the detail so that it was a slightly more solid piece.

I found it easy enough to use my own hand in a tightly clenched fist as reference (you should always use reference) to base the hulk fist cake on. The chocolate is quite easy to cut, model and smooth. It works well when wormed by your hands, and becomes less workable as it cools. I have pretty warm hands, so it wasn’t hard to keep it sculpt-able, but I can imagine using something to keep it warm, such as a hair dryer perhaps, could be a helpful addition.

Once the hulk fist was sculpted I left it overnight covered in cling-film to set, before addend some fine detail such as knuckle lines and creases in skin. Once this was done I decided that a little bit of black food-colouring paint in the gaps of the fingers and fine lines would give it a bit more depth and realism.

I used powder based paints mixed with vodka (as my nan and dad taught me) to apply to the chocolate. I find that better to use as it dries, where as the liquid food colouring didn’t set as well. I mixed up the black paint and either dry brushed the paint onto the hulk fist or painted it on to the lines and wiped away the excess with paper towel to leave only the black colour in the recesses of the hand. I let it dry out and it looked pretty good.